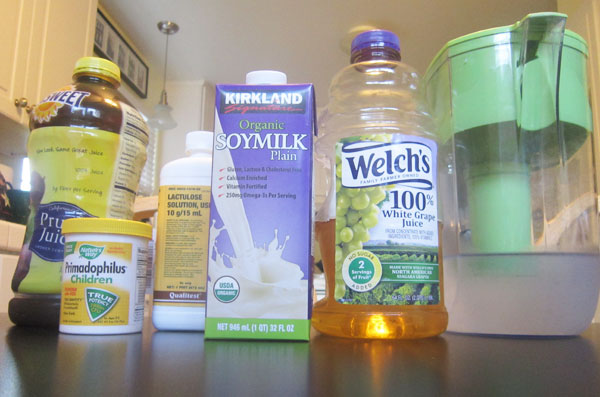 How we combat our baby’s chronic constipation

3 months old our daughter started showing signs of constipation. It worsened at 6 months, and it became extreme when she turned a year. Her pediatrician and the advice nurses were of no help. They would say things like, “Some babies are just constipated, and it should pass with time.” “It’s normal.”

There was no way that this was normal, or that I should just wait it out and do nothing. My daughter was in agony. Every bowel was met with fear and pain, and I mean every bowel! She would scream at the top of her lungs, turn bright red, and sob. These episodes would pass in about an hour after I administered one or two suppositories. I had had enough!

I took matters into my own hand, and researched blogs, the web, and picked the brains of family and friends. A lot of people mentioned taking Miralax, but I wanted to go more natural, and I was fearful of chemical dependence. I wanted to fix the problem not mask it.

My mother in law told me about her knowledge of the gut. She said that my daughter’s constipation could be due to her flora being all out of whack after being delivered via cesarean, and then being given 3 days of antibiotic in the first days of her life. First, she was not exposed to the good bacteria during a vaginal birth, and second was stripped of whatever good bacteria were left in her tiny tummy through antibiotics.

It all made sense then. After more research we landed on a regimen to rebuild the flora in her gut. These are the steps we took:

First thing in the morning, she would receive a bottle of 2 ounces of water and 2 ounces of grape juice. In this bottle she would receive 1 ½ tsp of Lactulose and ¾ tsp of Primadophilus. Her pediatrician gave the Lactulose dose while the acidophilus dose was what we worked our way up to. Her body was the one that gave us that dose. After her medicine bottle she was given a soymilk bottle to coat her stomach because the Lactulose had to be given with food.

(I feel I need to defend myself regarding the bottle of juice. I know I should never give juice in a bottle, but she wouldn’t drink her medicine any other way, and she needed to finish the whole bottle.)

At this time I would also have my morning coffee, and after about 30 minutes we would eat some breakfast.

Later in the day I would give her a capful of the kefir either mixed with a bottle or just on it’s own. It tastes a little like vinegar, but not as strong, so she would drink it without too much resistance.

At night she would have her nighttime bottle mixed with another ¾ tsp of acidophilus.

If she went a couple days without pooping, I would also give her some watered down prune juice at some point.

Things I want to note:

-This was completely trial and error. It’s what felt right to us, and may not feel right to others. But that is parenting in a nutshell.

-Steps 2 and 3 were temporary steps. We stuck to all steps until little sprout was pooping without pain. This included the psychological pain that she was associating with the process. Once she was regular, we gave her more grain, dairy (excluding cow’s milk) and more meat, though she still doesn’t have meat with every meal.

-Baby sprout is 21 months old, and she is still receiving her morning and evening regimens. We no longer give her kefir, and recently tried to reintroduce her to cows milk. That was a bad idea, but we had to try. We are currently trying to switch her to just sippy cups, but like I said before, we had to pick our battles, and it is more important for her to poop regularly, than it is for her to only drink from cups.

-We adjust here and there to see how her body is doing. If her body responds with constipation and pain, we immediately go back to this regimen, and I am proud to say that since we started this I have only had to give her 3 suppositories!

-One more thing I’d like to say, I am not a doctor! I am not receiving payment from any of the product”s manufacturers. What works for me may not work for you. These are the products that work for us, and I chose them on my own accord. I am simply a mom that is tired of living a life revolving around the pooping schedule of my baby.

Feel free to leave comments below telling me your story, or what has worked for you.